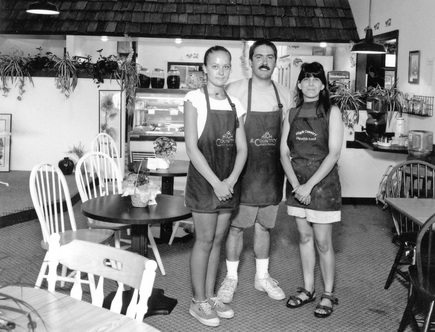 Bob Pickard (middle), Paula Pickard (right), and employee in an early High Country Café.
The history of our store begins in 1988 when the Pickard family bought a small health food that operated out of a  corner of the local grocery store. They sold vitamins, a tiny selection of bulk foods, a few boxed and frozen goods and not much else.

However, the little store was prosperous and in March of 1991 they were able to move into their own location. Nestled in the 49'er Shopping Center,  High Country Health Foods opened their own doors on April 1st, 1991. After a few months the business grew and, in November of 1991, they began serving sandwiches out of a small window in the back wall. Thus, High Country Café was born. 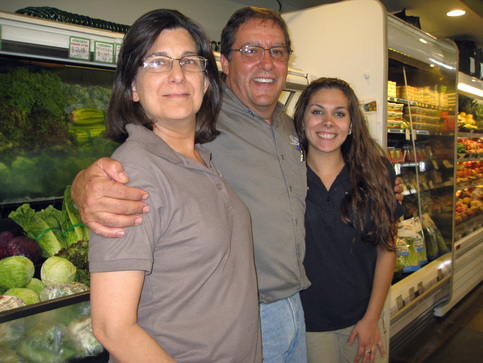 Paula, Bob (owners) and Laurel Pickard (manager)
The store remained that way until 1994 when the Pickard family acquired the business space next to theirs and expanded their own store. The café now had it's own home and more space was available for customers to come in, take a seat and dine in.

High Country Health Foods and Café remained in that spot until September of 2013 when they re-located to their current address. With three times the room as before the grocery is now bursting with colorful produce, fully stocked aisles, and an impressive bulk selection. The café has gained more work space and has expanded their menu to include baked goods, new salads, and more!

Thanks for getting to know us and we can't wait to see you!